One Hour a Day Open House

Please join us for an Open House of "One Hour a Day," an exhibition by famed Israeli painter, Shai Azoulay.

This special event includes access to the exhibit and an opportunity to speak with the artist and curator.

Born in 1971 in Kiryat Shmona, Israel, Shai Azoulay attended the Bezalel Academy of Arts and Design in Jerusalem, receiving his BFA in 2000 and MFA in 2007. While still in graduate school, he received the Extraordinary Artistic Achievement Award from the Bezalel Academy.

Azoulay had a solo exhibit at the Tel Aviv Museum of Art in 2007 and also received the museum’s Legacy Heritage Fund Prize. He has had solo exhibitions in Tel Aviv, Tokyo, London and Jerusalem, and group shows in Israel, Rome and New York.

In 2005, Azoulay became acquainted with the teachings of Rabbi Nachman of Breslov (b 1772) whose religious philosophy revolved around closeness to God and speaking to God, “as you would with a best friend.” Not raised as an observant Jew, he embraced this new philosophy, leading to a breakthrough in his spiritual and artistic life. 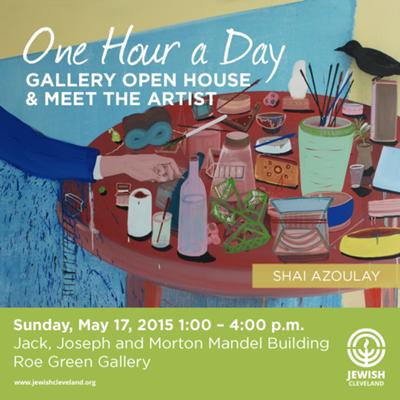