You are cordially invited to celebrate at The Women's Philanthropy Signature Event.

Engage with Monica Lewinsky, social activist and Vanity Fair contributing editor. She joins us to discuss “The Price of Shame,” based on her world-renowned TedTalk.

Honor Nan Cohen, recipient of the 2018 Ruby Bass Award, for her exemplary dedication and leadership to the Jewish Federation of Cleveland and the Women’s Philanthropy Campaign.

To inspire future generations and to ensure the continuity of our tradition of tzedakah, we invite you to bring your daughters, daughters-in-law, and/or adult granddaughters with you to this event.


MONICA LEWINSKY is a social activist, a global public speaker, a consultant and Contributing Editor to Vanity Fair. She advocates for a safer social media environment and addresses such topics as digital resilience, privacy, cultivating compassion, overcoming shame, and equality for women. In March 2015, she was a speaker at the annual TED Conference in Vancouver. Her speech, “The Price of Shame” has been viewed over 12 million times. She has also spoken at the Forbes 30 Under 30 Summit and gave the Ogilvy + Inspire Lecture at Cannes Lions. For 2017’s National Bullying Prevention Month, Monica created the #ClickWithCompassion campaign and released a now award-winning PSA in collaboration with BBDO New York which asked people to rethink their online behavior in an offline social experiment. “In Real Life” was trending on YouTube, has been viewed over 25 million times and has been nominated for an Emmy in 2018. She is a founding board member of the Childhood Resilience Foundation and on the advisory board of Project Rockit. Monica is an Ambassador for The Diana Award’s Anti-Bullying Program and Bystander Revolution, as well as supporting numerous other organizations in the space.

Established in memory of Ruby Bass (z”l), the award honors her lifelong passion for the Jewish Federation of Cleveland and her commitment to the Women’s Philanthropy Campaign. This year’s recipient, Nan Cohen, epitomizes Campaign volunteerism and dedication to the Federation. In Nan’s honor, the Ruby Bass Challenge Endowment Fund will make a donation to the Women’s Philanthropy Campaign for the 2019 Campaign for Jewish Needs. This award was established by Ruby Bass’ son Jonathan, his wife Stephany and her mother Lenore Kessler, who was also Ruby’s dear friend.

Lions of Judah proudly wear a gold Lion pin, which represents the strength, honor and dedication of the Tribe of Judah, one of the Twelve Tribes of Israel.

Pomegranates proudly wear a silver Pomegranate pin; they are named for the biblical fruit, said to contain 613 seeds – one for each of the commandments found in the Torah.

* Individual photo opportunities with Ms. Lewinsky will be available to new Lions of Judah, or Lions of Judah who make an increase of $180 or more to the 2019 Campaign for Jewish Needs. 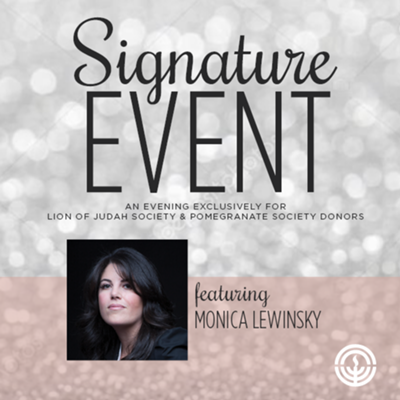